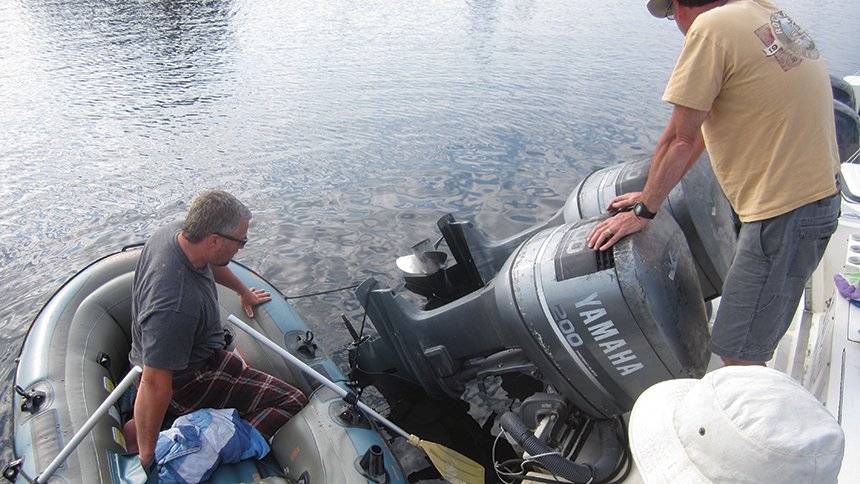 During a cruise in Georgian Bay, Ontario, I ran Holly Marie aground on a hazard clearly marked on the charts, damaging both props and lower units. Luckily, we had spare props onboard and could change them with the boat in the water.

After the excitement was over and we were safely anchored for the evening, I needed to figure out what had gone wrong. As the captain, I’m responsible for my vessel’s safe operation and navigation.

Factor # 1: Failed to lay in a course

We were boating with a group of boaters we’d traveled with many times before. The captains met each morning to discuss the course and plan the day’s cruise. That morning, I missed the meeting to deal with a marina issue, which meant I left the dock without a clear plan for the day. Our destination was a remote location I’d never been to before. The first 27 miles were relatively easy navigation, but the last 5 were tricky.

Factor #2: Failed to read charts correctly while traveling at too high a rate of speed

At the end of the open water portion of the run, the boats were spread out as we entered the entrance to Bad River. We entered second, a half mile behind my good friend, Jim. We were both running at 30 miles per hour and should have slowed down as we entered shallower water. We were following the small boat route shown as a red dashed line on the charts.

The river has a range to guide you in. On the chart, it’s marked as a solid black line that changes to a dashed line. In Piloting, I learned not to stay on a range line once it turns to a dashed line unless you want to run aground. However, my chart book for the area was printed in black and white, and I misread the dashed range line as a small craft route line. If I had planned my route on the dock that morning, I would have noticed that there was  no small craft route for this portion of the trip.

The first rule of navigation is the red buoys are on your right as you return from the sea. We had been running with the red buoys on our left for most of the day. As we changed course into the river, the buoys changed sides as well, but I failed to make the change, so I took a green buoy on the wrong side.

As we entered the tighter portion of the river, Jim was a half mile in front of me. I dropped into his track and followed him in. When he realized he’d taken the buoy on the wrong side and was out of the channel, he got on the radio and told me not to follow him. Unfortunately, his radio was set to the wrong channel, so I never got his message. If I had been doing a better job of navigating, I would have challenged his course instead of blindly following it.

Factor #5: Not having a second mate working the paper charts

When we boat on big water, my wife, Holly, keeps track of our location on paper charts; this allows me to focus on the electronic charts. She adds a second set of eyes and situational awareness.

On this trip, my daughter, Emmarie, had taken over this job to gain experience reading charts and navigating, so I was looking at both the paper and electronic charts. Emmarie does not have the experience to notice or challenge my navigation errors. If Holly had been on the paper charts, I’m confident she would have challenged my course, or I would have noticed my mistake on the electronic charts, and we would not have run aground.

The lake was three feet higher than usual that summer. In an average year, the rocks would have been partly exposed, making them easier to see.

Going over everything that happened, I believe speed was the number one reason for the accident. Luckily, just prior to impact, something felt wrong, and I pulled the throttles back and took the boat off plane. We were in the process of stopping when we hit the rocks. The hull never made contact; only the outboards hit and dragged along the rock shelf. I was able to put the engines in neutral and raise the motors as we slid along the rocks. Once free, Holly and Emmarie went up on the bow and guided us to safe water.

I had been traveling too fast in unknown waters and should have slowed down when I got on the range line. Staying on plane and following the range was poor boat handling. If we’d been traveling at a slower speed, I would have had time to recognize the hazards and deal with them appropriately.

John Raby and his wife, Holly, joined the Minnetonka Power Squadron in 2009, attaining the grades of JN-ACN and AP respectively. The pair enjoy boating on the Great Lakes and western rivers with their daughter Emmarie in their 23-foot Boston Whaler Holly Marie.