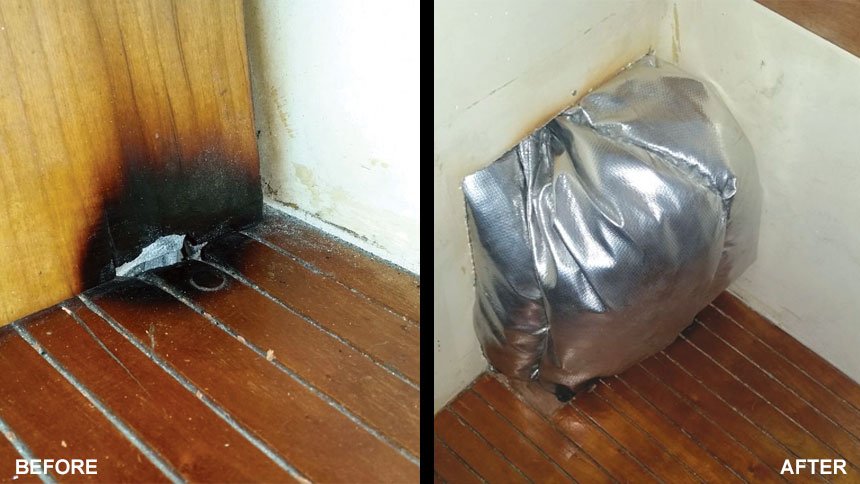 Serious boating tragedies occur at sea, dozens, hundreds or thousands of miles from shore—right? But on the Intracoastal Waterway just dozens of yards from land? To Linda and me, it seemed highly unlikely, if not impossible. A recent experience changed our minds.

Final Edition had just completed a three-hour run from its home berth in Gulfport to Longboat Key Moorings on Sarasota Bay. The newly rebuilt engine ran like a top; oil pressure and engine temperature were nominal as we varied the speed from around 2200 rpm to 2600 rpm (outside the slow zones, obviously; top end is 3000) to aid break-in.

After docking, we went below and smelled something funny—familiar but not readily identifiable. The odor lingered even after opening doors and hatches. After a few hours, the ever-observant Linda pointed out that a corner of the wood entry steps was charred! Now we knew: The interior of our boat smelled like a campfire.

We’ll never know if an actual fire could have broken out had we driven farther. It certainly wouldn’t have been pretty, with 200-plus gallons of diesel fuel and 20 pounds of propane nearby.

The accompanying photos tell the tale. The engine’s exhaust elbow protrudes slightly into the stairwell, hidden from view by a small wooden cover. The exhaust elbow mixes raw cooling water with the super-hot exhaust gases from the combustion process. In this installation, the exhaust elbow has two 90-degree turns. Two insulation blankets cover each turn of the elbow, with just a tiny gap between them. That small gap allowed enough heat to escape and blacken the nearby wood and fiberglass bulkhead.

We discovered this on a Saturday. Our extraordinary mechanic came out on Sunday to evaluate the situation and was back first thing Monday to fix it. He decided to cover the gap with yet a third, thick piece of insulation, which required cutting away a bit of stair and fiberglass.

It worked. Running similar speeds on the rest of the trip, the new insulation felt warm to the touch but not hot. We had no more charring.

Our takeaway from this experience: Anything can happen, anywhere, anytime, on a boat. Expect it. Be vigilant. Be prepared.
By the way, for us, campfires won’t seem quite the same for a while!

Bob Potter is a retired radio news broadcaster from Minnesota. He and his wife Linda boated for many years from marinas in St. Paul and Afton. Since 2005, the couple has lived in Florida, where they are active members of St. Petersburg Sail & Power Squadron/22. Their boat, Final Edition, an Albin 32+2, is for sale.

This article first appeared in the squadron newsletter, Force 12.