Longtime denizen of the Maine coast, Richard George “Dick” Dexter, 84, died at his residence on Dogfish Head on Sunday, 29 Nov. 2015. He was born in Boston on 23 Jan. 1931 to Anne N. and Willis P. Dexter. Dick’s piercing blue eyes and frank ways of expressing himself with his thick Boston accent will be long remembered and missed. 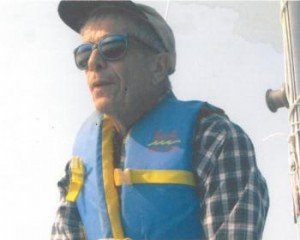 In the early 1980s, he settled permanently on Dogfish Head in the cottage built by his father during the 1950s. The land had been purchased by his great‐grandfather in 1889.

Always learning and yearning for knowledge, Dick could converse on any number of topics, his favorites being sailing, food and Model T Fords. People have said of him that he was never lacking in words. In later years, he earned a bachelor’s degree in business administration from Northeastern University in 1986. It meant commuting back and forth from Maine to Boston for many weeks before graduating.

His membership in many organizations amounted to much more than simply being on a membership role. He was an active member of Wawenock Sail & Power Squadron, achieving the grade of JN. He instructed many courses and most recently served as flag lieutenant. His love of boating, especially sailing, gave him and his friends much enjoyment. During the 1970s, he crewed on an ocean racer out of Marblehead, Massachusetts, to such destinations as Newport, Rhode Island; Bermuda; Halifax, Nova Scotia; and Monhegan Island and Portland in Maine. He sailed his boat out of Southport Island for many years as well. Dick will be sorely missed by his squadron.